We are open 8AM - 5PM (GMT+7) Mon - Sun Email: hoiancyclingadventure@gmail.com

Live customer feedback
Francesca Cooper
We had a really amazing experience on the Hue City tour. Our guide was extremely informative and enthusiastic - we learnt a lot about Vietnam history, culture and current dynamics. Whatever we asked about we... Read full review
James Wilkinson
Hue day trip from Da Nang  Excellent tour with knowledgeable guide and driver. This turned out better than doing it ourselves as everything was prearranged and organised for us so that we could see all the... Read full review
Lash Claire
This was a wonderful hike - the scenery was spectacular and the accommodations were great. Steve and Maria, who were the local reps, were fantastic. They were extremely helpful when I had questions or needed... Read full review
McConnell Kevin
Everything was really well organised with good accommodation, friendly hosts, and taxi transfers. Thanks to Ricardo for visiting us on the first day and talking us through the various stages of the walk, many... Read full review
Allison
This trip was fantastic, The Natural Adventure Company was easy to work with, their communication was great and made the trip stress free, they also worked with us on some changes to the trip as we had a rental... Read full review
Bill D.
Great company and made everything really simple for us. This "relaxed" itinerary allowed enough time for sightseeing and relaxation. Accommodation was clean, service was great and we couldn't ask for more. Read full review
View more
Overview

On the way from Hoi An to Hue you will have a chance to visit some beautiful attractions such as Hai Van Pass and Lang Co beach. You will gain a very good understanding of Vietnam's history, culture and the Royal Family– the last dynasty in Vietnam from 1802 to 1945 and learn more about royal life, royal architecture and secrets in the royal tombs.

Itinerary
7.30 am: Your tour guide will pick you up at your hotel and transfer you to Huế City. On the way you have a chance to take pictures on top of Hai Van Cloudy Pass or the other beautiful part of the lagoon and rice fields.
10.00 am: Visit the Imperial Citadel, famously one of Vietnam’s seven UNESCO World Heritage Sites. The Imperial City of Hue has long been a must-see attraction for tourists visiting the hidden charm of Vietnam.
The Imperial City of Hue was a walled fortress and palace belonging to the ancient city of Hue which was the capital city of the Nguyen Dynasty for 140 years from 1805 until 1945.
The grand structure was planned to be built in 1803 by Gia Long – an emperor who founded the Nguyen Dynasty. It took 27 years from 1805 to 1832 to build the Imperial City of Hue under the reign of Minh Mang making it the most massive structure built in modern Vietnam. It involved thousands of workers and millions of cubic meters of rock and a massive burdening workload. It is  located on the northern bank of the Huong River, turning South with a total land area of 520 ha. The place was made a UNESCO Heritage Site in 1993 with the remaining buildings being actively restored and preserved after being destroyed during the Vietnam War.

We will take a boat trip on the Perfume River (Sông Hương) to visit Thien Mu Pagoda which was built in 1601 between a river and a pine forest. Thien Mu Pagoda (“Heavenly Lady Pagoda”) in Hue is one of the country's oldest and prettiest religious buildings.

We wll visit Khải Định Mausoleum which belonged to the 12th King of the Nguyen Dynasty. It was built from 1920 to 1931 taking 11 years to complete. The tomb is a blend of Western and Eastern architecture and is located on a steep hill outside the capital city of Huế.
What to Expect
Experience the glory of Vietnam's royal past with a day trip to Hue still recognized by many as the country's Imperial City. Packed with old temples, stone citadels, ancient tombs and more, Hue is abundant in political, cultural and religious history that's just waiting to be discovered. Board a shuttle from the meeting point in the morning and you'll be off to the renowned city but not before you make a couple of photo stops at Hai Van Pass and Lang Co Beach a scenic stretch of palm-covered white sand that runs along the highway on the way to your destination. Our first stop in Hue will be the famous Imperial City, a major attraction surrounded by a moat and thick stone walls that encompass palaces and shrines. You will see the historic Khai Dinh Tomb and the Thien Mu Pagoda an unofficial symbol of Hue that stands 7 storeys high.
Inclusions
Photos Gallery 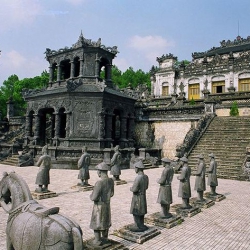 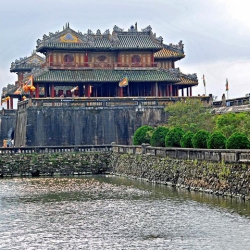 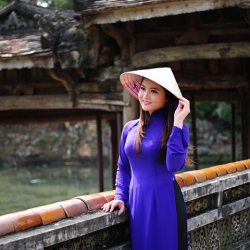 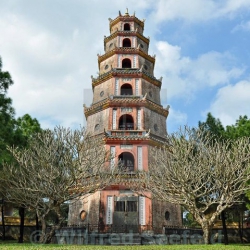 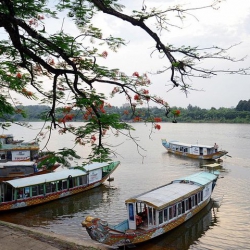 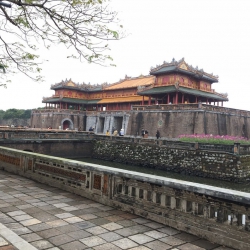 Reviews (0)
Write a review
Book Now
Maybe you like 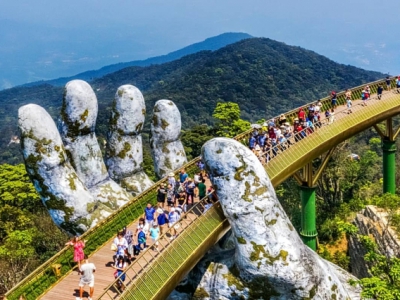 Location: At your hotel Duration: Day tour
from $105115
View detail 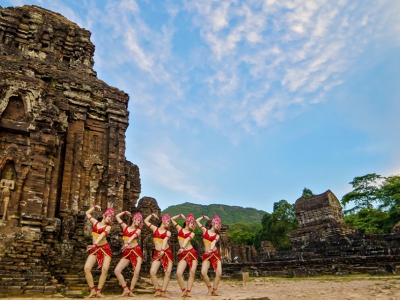 My Son Sanctuary - Sunrise or Sunset 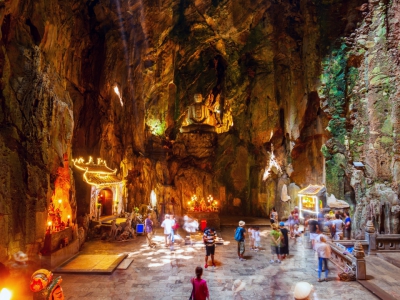 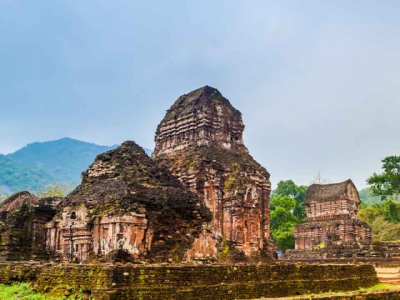